skip to main | skip to sidebar

Golf. Is it really the way to spoil a good walk?

So the last week has been a great week for European golf.


After extending into a fourth day for the first time ever, the Ryder Cup was won by Europe by a point. Graeme McDowell won his final singles game against Hunter Mahan. McDowell held his nerve to win on the 17th green by 3 in 1. Despite being affected by some horrendous weather at Newport's Celtic Manor, the Ryder Cup was engrossing, tense and had some great sporting moments during the four days of play. You can see highlights of the victory here. I think that the odds of Europe Ryder Cup team winning the team prize on the BBC's Sports Personality of the Year have dramatically shortened.


The thing is I don't think golf spoils a good walk. The game is often frustrating but when everything clicks, the game of golf is great. Sinking a long putt or hitting a great tee shot feels brilliant. Today I had an early morning round of golf at Exminster Golf Centre. As I drove to the golf course, I started driving through quiet dense early morning mist. This quickly burned off and when I reached the second green this was the view I saw. 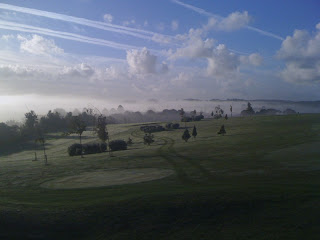 The weather today has turned out great and I had an enjoyable round of golf. My game was a little rusty but I didn't play too badly. Looking forward to having another game tomorrow and hopefully my game will be a little better.

Email ThisBlogThis!Share to TwitterShare to FacebookShare to Pinterest
Labels: Golf

Links to my Favorite Webpages